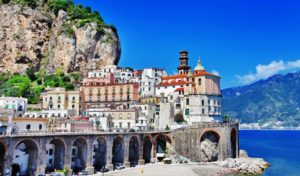 Costiera Amalfitana: “Positano”, “Amalfi” and “Ravello” are the pearls of the Amalfi coast, which overlook the rocky coves, rich in hidden myths and legends. These heavenly pearls are situated halfway between the sea and the land and provide some of the most breath-taking beautiful views the world has to offer. From “Victor’s House” it is easy to get to these enchanted places, as just opposite the entrance of the apartments is the bus stop that goes directly to the Amalfi Coast, with th be first stop at “Positano”. “Victor’s House” also organises private or shared excursions which depart from the apartment. The first stop is along the way to capture one of the most beautiful landscapes in the world. When you get to “Positano” you visit the village with deeply artistic and inspirational traditions. Then it is off to “Amalfi” where you stop to walk among the most beautiful villages like “Praiano”, “Furore” and “Conca dei Marini”. We then reach “Amalfi” which is also famous for the production of handmade paper. “Ravello”, “the city of music”, is next with its outdoor concerts and gorgeous views. Described by the most famous travellers as a “spiritual home”. Here you can visit Villa “Ruffolo” and Villa “Cimbrone”. Do not forget the ceramics of “Vietri sul Mare”. This place is one of a kind! 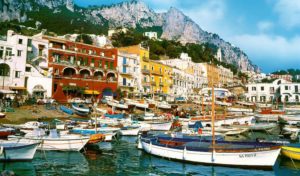 Capri: From “Victor’s House” it is easy to get to the Isle of Capri, the most precious treasure that lies hidden in the waves of the Gulf of Naples. Here the sea merges with the sky and the water is the bluest in the world. There are various ways to visit the island of Capri. Various ferries run every 20 minutes from the port of Sorrento or “Victor’s House” can arrange private or shared tours with pick up directly from the apartment. These include a cruise along the coast of Sorrento and around the island of Capri to see the most beautiful places like the Blue Grotto, the “Faraglioni” rocks, the White cave, the Natural Arch, the lighthouse of “Punta Carena” and the Green cave. In addition to the tour of the island, the on land excursion gives you free time to do shopping in the streets and to visit the island and its beauties such as “via Krupp”, “Monte Solaro”, Villa “San Michele”, the Natural Arch, the gardens of Augustus and the heart of the Isle of Capri itself, the main square. 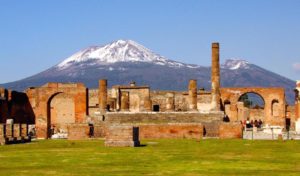 Pompei & Vesuvio & Ercolano: “Victor’s house” is well connected to the ruins of Pompeii, Vesuvius and Herculaneum. We highly advise that our guests visit Vesuvius and the ruins of Pompeii or Vesuvius and the ruins of Herculaneum on a one-day tour. “Victor’s House” organises excursions to Pompeii and Vesuvius by private bus. A professional guide will accompany you to visit the ruins of Pompeii, the city buried by the eruption of Vesuvius in 79 A.D. It has remained virtually intact, which is a testimony to the life of the commercial city of ancient Rome with its spectacular Amphitheatre, the Thermal Baths, the Forum, the Frescoes and Mosaics. After the visit there is some free time for a snack then it is off to the Vesuvius where, with a minivan, you will reach a height of 1000 meters, then continue on foot along a path to reach the summit of the volcano, for an impressive view of the crater with a specialised guide. Vesuvius is unique in the fact that it is the only volcano where you can walk around the crater. A visit to Vesuvius can be combined with a visit to the ruins of Herculaneum, a residential place for the Roman aristocracy. Found later than Pompeii, Herculaneum was buried under a blanket of ash, lava and mud during the eruption of Vesuvius in 79 A.D. It was discovered by chance following the excavations for the construction of a well in 1709. During excavations, remains of the Theatre, the ancient sewer in addition to several houses were found at the archaeological site. Inside the Villa “dei Papiri”, bronze and marble statues and a collection of more than 1700 papyri were unearthed. The city was surrounded by walls and outside of the walls are the Suburban Thermal Baths. 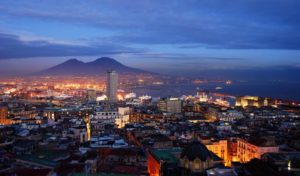 Napoli: From “Victor’s house” it is easy to reach the city of Naples. Not far from the apartment is the train station where you can catch a train that goes direct to “Piazza Garibaldi” in the centre. There, take a walk across the typical fish market to reach the Cathedral of Naples then continue along the famous “Via S.Gregorio Armeno”, the street of the traditional “presepi” (nativity scenes), then Naples opens up for you to arrive at the famous monastery of Santa Chiara for a visit and then to “Gesù Nuovo”. After a lunch break, you can go to the city’s most striking and famous “Galleria Umberto”, “Piazza Plebiscito”, “Piazza Municipio”, or visit the National Archaeological Museum. “Victor’s House” offers various types of excursions to Naples, both private and shared. 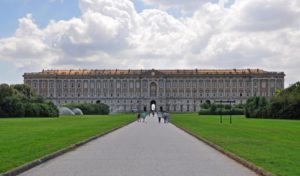 Reggia di Caserta: “Reggia di Caserta” can be reached in less than 40 minutes by train. You need to take the “circumvesuviana” to Pompeii then catch another train to Caserata. The Palace is known as the “Versailles of Naples” because of the Royal Palace built here by Charles of Bourbon in the eighteenth century. The Palace is considered to be one of the most sumptuous in Italy with 1,200 rooms full of chandeliers, frescoes, tapestries and history. The beautiful gardens surround the great, 75 meter, waterfall which is visible from the building. A guided tour of the palace includes the royal apartments and the Park. The visit can be combined with Naples and “Caserta Vecchia”. We organise private and shared excursions. 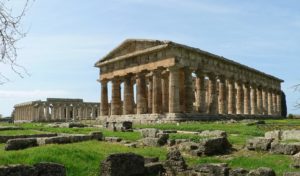 Salerno e scavi di Paestum:The city of Salerno and the Greek ruins of “Paestum” are reached by public transport or with our excursions service. Starting from the apartment by bus, “Victor’s House” organises the excursion to reach the medieval town of Salerno first. After some free time in Salerno, you go to “Paestum”, the city founded by the Greeks and named after Poseidon, the sea god to whom it was dedicated. During the time of the ancient Greeks the two “Basilica” (Temple) of Poseidon and of Ceres were built. They are considered to be the most beautiful examples of their kind, and better preserved than the “Acropolis” of Athens. Enjoy a very informative guided tour of this beautiful archaeological site and time permitting, visit the nearby museum containing sculptures and site exhibits.